An unequalled variety of landscapes and natural spaces.

The various facets of Charlevoix

Here is a brief preview of the fields that inspire us in our interpretation work. References towards reliable sources are also provided. 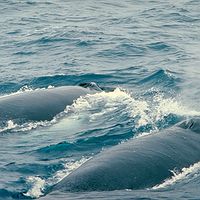 As for the marine mammals, there are 2 resident species, the Beluga and the Harbour Seal as well as some other species that stay during summer: the harbour porpoise, the Minke Whale and the Fin Whale. The Fin Whale is considered at risk, the Harbour Porpoise is considered as ''special concern'' whereas the St. Lawrence Estuary Beluga population is considered ''threatened''.

Rules governing the approach of marine mammals were elaborated by the Marine Park. They govern how to behave in the presence of maritime mammals according to their species.

Precise and current data
For more information about marine mammals living in the St. Lawrence Estuary, you can consult Baleins en direct, a product of the the Group for Research and Education on Marine Mammals (GREMM).

The charlevoix coast is part of the old base of the Canadian Shield constituted by crystalline rocks dating back between 600 million and 4 billion years. The region's current configuration results, among others, from a meteorite impact that occurred 350 million years ago and created a crater with a diameter that measures over 56 km.

A bit of history

Nowadays, business in Charlevoix is based on tourism, forestry and agriculture. First populated around 1680, the region is characterized by its varied landscapes that we owe to the steep relief of the Laurentians.

The entire region is located in the Middle St. Lawrence Estuary. The physiography of the average estuary is characterized by a series of islands and sandbanks that are in-between the North and South channels. Upstream, the water is brackish and can become tepid in summer (14oC). Downstream, the water is two thirds as salty as the ocean (22 g of salt per kg of water) and varies by only four degrees between summer (6oC) and winter (2oC).